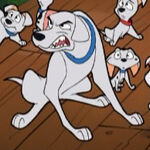 Cleaning up this wiki

Trolls making the wiki a mess.

What's up crazy dudes, I'm BaldiBasicsFan (or you could call me Baldi for short). I'm one of the biggest 101DS fans in America. I do wish it airs on Disney Channel USA, but what ever.

Janis Joplin - Piece of my heart HQ
I am the voice of Janis Joplin. Oh wait, she died in 1970!
Add a photo to this gallery

I don't have a YouTube account because the policy of the website is doing awful so far, so I rather have a VidLii account. Link to me on VidLii: https://www.vidlii.com/user/BaldiBasicsFan Here is some TV shows that I want to create when I'm older:

By the way, my favorite episode of the series is "The De Vil Wears Puppies". I used to have a big interest in logos, but I am banned off of the CLG Wiki for writer request spamming. I WANT TO REMOVE SCARE AND CHEESY FACTORS OFF OF THERE! Well, I got to the Miraheze site to rejoin and apologize so I'm good. Also I now write episode plots on Wikipedia.

Retrieved from "https://101dalmatianstreet.fandom.com/wiki/User:BaldiBasicsFan?oldid=23335"
Community content is available under CC-BY-SA unless otherwise noted.