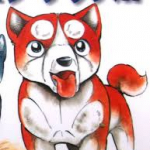 Hello my dudes and chicks. You may know me as GingaFan4Life, the guy who made my headcannon about Dawkins being transgender, or at least him being a trans representative, visible for the eye to see. Anyway, I got into this show sometime around March of 2019, when I finally watched the episode Boom Night.  Ever since I saw Dolly's awesomeness, I was officially hooked on this show, and now I tune into every new episode whenever I can. I have this huge project planned for an entire review of season one, and I want all of you to see it. It has lots of swearing in it though, so I'll just leave a link to my Deviantart after it's uploaded so you can read it there for those who're interested. Anyway, here's some stuff I think you'll enjoy hearing about me.

My favorite characters on the show

1. Dolly (Obviously. Daring, fun loving, and just a blast to be around in almost every scene she's in.)

2. Deja Vu (She's just so quirky and huggable! She completely flexes on Destiny and Dallas.)

3. Hunter De Vil (He was good at first, but I love him so much more after his amazing redemption.)

5. Diesel (They put dirty air-head into a dog, had him dig all the time and he's glorious.)

My least favorite characters on the show

1. Dante (Why is this obnoxious, screaming black turd so beloved? All he does is scream about nothing.)

2. Portia (She was awesome in her debut, but she's now boring, to even insufferable.)

3. Bessie (Remind me to have burgers at least once a week so I can spite this cow.)

4. The Dimitri Trio (They were fine until they got away with bullying Deepak.)

Clarification: Cruella didn't make my favorites list because she was already a character in the movies and the amazing 90s show, and these lists are 101DS exclusive. Though, if I DID include her, she'd probably be in my top five.

My friends on the wiki

My enemies on the wiki

Retrieved from "https://101dalmatianstreet.fandom.com/wiki/User:GingaFan4Life?oldid=22677"
Community content is available under CC-BY-SA unless otherwise noted.