All easter eggs we can find

Let's try find as many easter eggs and references in 101 Dalmatian Street as we can. This is actual list of those I have found for now:

In theme song we can see Dolly driving the London bus (New Routemaster or Wright SRM). This scene can be reference to 101 Dalmatians II: Patch's London Adventure movie were pups are driving classic London bus. 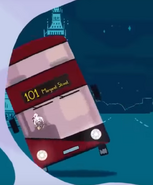 In original 101 Dalmatians movie during scene when family watching TV one pup is sitting on Pongo's head covering his eyes with paws. In Winter Funderland we can see one of pups sitting on Doug's head doing this same thing during watching weather podcast. 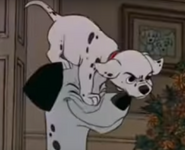 In first episode we can see photo of Pongo and Perdita, parents of original 99 pups, and grandparents of Delilah. Even if they doesn't look the same, they were for sure based on look of those Diney dogs. 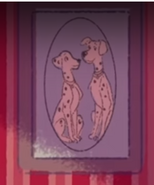 One of elements of 101 Dalmatians II: Patch's Longon Adventure was artist that was creating paints for Cruella de Vil that show black spots on white background. We can see similar style on paints located in many backgrounds in 101 Dalmatian Street. 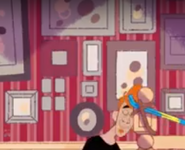 De Vil next to some of those paints.

Now I will show you 2 scenes one from 101 Dalmatians II: Patch's Longong Adventure and one from Winter Funderland. Way that heads of 2 dogs are shaped to fit into each other is very similar.

Thunderbolt and Lightning in 101 Dalmatians II

Dolly and Dylan in Winter Funderland

In episode Who the Dog Do You Think You Are? on attic we can see Roger's hat from original movie and a few of his instruments in the background.

Hat in the attic in 101 Dalmatian Street (sorry for quality, I couldn't find better image)

In beginning of original 101 Dalmatians movie we can see a few dogs with their owners. One of them was puddle that could be inspiration to create Portia Poodle that is one of show characters that so far has biggest participation in Crushed Out. 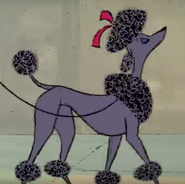 In Dog's Best Friend on wall is located image that shows Dylan's look from Test Pilot and concept posters. 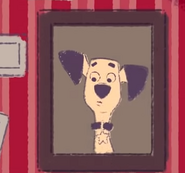 Domino is one of Doug and Delilah's puppies whos name was revealed in In The House song. Dog with that name also appear in previous live-action movies. However it could be just coincidence.

In show appearing Hunter de Vil, who is descendant of Cruella de Vil, one of most famous Disney vilans that appear in animation movie 101 Dalmatians.

References to other media and culture

1. Reference to The Beatles

In opening theme we can see legs of 4 men crossing the street. This is reference to The Beatle's album Abbey Road cover which is featuring them walking across the northwestern zebra crossing on the intersection of Abbey Road.

2. Reference to The Purge

As creators said, episode titled Boom Night is parody of 2013 movie The Purge, an horror thriller where for one day all crime, even murder, is temporarily legal.

In Power to the Puppies Diesel is giving a speech that is similar to Scar's song Be Prepared from Disney Lion King.

Scar during speech in Lion King.

4. Reference to Lady and the Tramp

One of most famous scenes from Disney's movies about dogs is date of main characters from Lady and the Tramp during witch 2 dogs were eating spaghetti next to Italian restaurant kissing accidentally. Simlar situation was shown in ending scene of Crushed Out during Dylan and Portia Poodle's date.

Lady and the Tram date scene.

In episode Walkies on the Wild Side Sid Squirrel was named 50 Nuts what was reference to American rapper 50 Cent.